Apparently, there’s 20 more spam comments, so this would be a follow-up of Comment Spammers Notice. The comments are the same, but not the usernames (same format, though), IPs, and email addresses). I guess I will have to close ALL comments BEFORE June 1st. The ONLY place comments will be allowed is the Need Help? page. I will be making a post to follow-up on the $10 KK card and a few more things.

Now, let’s get back to the comments. (I’m copying the format as the other post, since they’re the exact same thing: duplicate spam comments.)

Here are the pictures of the comments and relative email addresses and corresponding IP addresses (at 75% view). 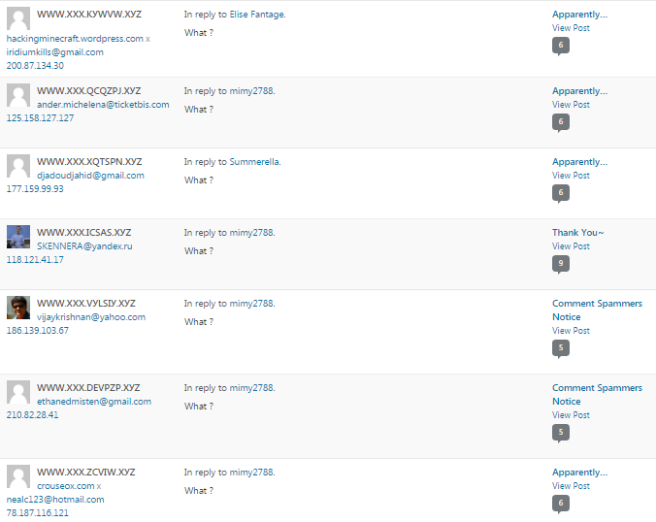 Here’s the list of IPs (in order), the corresponding country [I’m a bit suspicious about this], what they are reported for, and the number of reports (if reported already):

Credits to abuseipdb.com for report information.

Results: 85% of IPs have been reported before

Here’s the list of email addresses (in order) and if they can be found somewhere online (yes=found online, no=not found online):

Results: 60% of email addresses can be found online

NOTE: Usernames are not important when compared to the email and IP addresses.

NOTE 2: These accounts may or may not be verified WordPress accounts.

I apologize for those who want to read about Fantage, but this is the kind of stuff bloggers don’t mention often. I know that this (and some other posts) is/are unrelated to Fantage, but its related to this blog.

NOTE: I am not promoting anything, especially not emailing the addresses above and on Part 1. Please avoid that for safety, but you can share them wherever you want and/or you can create a fake account and spam them to get a reply from them. Who knows who they really are, until you get emailed by them. To avoid emailing, you can simply report them to the abuse departments of the domain (example: you would report username@example.com to abuse@example.com). You may look up the email addresses (on this post or in Part 1) to find some information about them. You may be surprised at what you find.

Commenters should know Fantage for at least 1.5 months.

More info can be found around the blog.